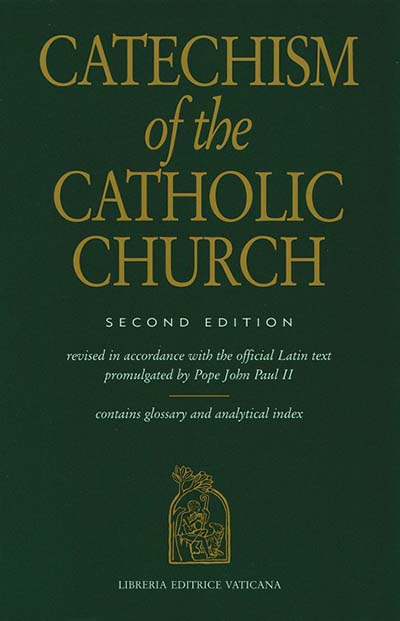 The institution of the Eucharist

“The Lord, having loved those who were his own, loved them to the end. Knowing that the hour had come to leave this world and return to the Father, in the course of a meal he washed their feet and gave them the commandment of love.161 In order to leave them a pledge of this love, in order never to depart from his own and to make them sharers in his Passover, he instituted the Eucharist as the memorial of his death and Resurrection, and commanded his apostles to celebrate it until his return; “thereby he constituted them priests of the New Testament (Council of Trent (1562): DS 1740).”

Jesus chose the time of Passover to fulfill what he had announced at Capernaum: giving his disciples his Body and his Blood:

Then came the day of Unleavened Bread, on which the passover lamb had to be sacrificed. So Jesus sent Peter and John, saying, “Go and prepare the passover meal for us, that we may eat it….” They went … and prepared the passover. and when the hour came, he sat at table, and the apostles with him. and he said to them, “I have earnestly desired to eat this passover with you before I suffer; for I tell you I shall not eat it again until it is fulfilled in the kingdom of God.”…. and he took bread, and when he had given thanks he broke it and gave it to them, saying, “This is my body which is given for you. Do this in  remembrance of me.” and likewise the cup after supper, saying, “This cup which is poured out for you is the New Covenant in my blood (Lk 22:7-20; Cf. Mt 26:17-29; Mk 14:12-25; 1 Cor 11:23-26).”

By celebrating the Last Supper with his apostles in the course of the Passover meal, Jesus gave the    Jewish Passover its definitive meaning. Jesus’ passing over to his father by his death and Resurrection, the new Passover, is anticipated in the Supper and celebrated in the Eucharist, which fulfills the Jewish Passover and anticipates the final Passover of the Church in the glory of the kingdom.

“Do this in memory of me”

The command of Jesus to repeat his actions and words “until he comes” does not only ask us to      remember Jesus and what he did. It is directed at the liturgical celebration, by the apostles and their successors, of the memorial of Christ, of his life, of his death, of his Resurrection, and of his intercession in the presence of the Father (Cf. 2 Cor 11:26).

From the beginning the Church has been faithful to the Lord’s command. of the Church of Jerusalem it is written:

They devoted themselves to the apostles’ teaching and fellowship, to the breaking of bread and the prayers…. Day by day, attending the temple together and breaking bread in their homes, they partook  of food with glad and generous hearts (Acts 2:42, 46).

It was above all on “the first day of the week,” Sunday, the day of Jesus’ resurrection, that the Christians met “to break bread (Acts 20:7).” From that time on down to our own day the celebration of the Eucharist has been continued so that today we encounter it everywhere in the Church with the same fundamental structure. It remains the center of the Church’s life.

Thus from celebration to celebration, as they proclaim the Paschal mystery of Jesus “until he comes,” the pilgrim People of God advances, “following the narrow way of the cross (AG 1; cf. 1 Cor 11:26),” toward the heavenly banquet, when all the elect will be seated at the table of the kingdom.”

If from the beginning Christians have celebrated the Eucharist and in a form whose substance has not changed despite the great diversity of times and liturgies, it is because we know ourselves to be bound by the command the Lord gave on the eve of his Passion: “Do this in remembrance of me (1 Cor 11:24-25).”

We carry out this command of the Lord by celebrating the memorial of his sacrifice. In so doing, we  offer to the Father what he has himself given us: the gifts of his creation, bread and wine which, by the power of the Holy Spirit and by the words of Christ, have become the body and blood of Christ. Christ is thus really and mysteriously made present.

We must therefore consider the Eucharist as: – thanksgiving and praise to the Father;
– the sacrificial memorial of Christ and his Body;
– the presence of Christ by the power of his word and of his Spirit.

Thanksgiving and praise to the Father

The Eucharist, the sacrament of our salvation accomplished by Christ on the cross, is also a sacrifice of praise in thanksgiving for the work of creation. In the Eucharistic sacrifice the whole of creation loved by God is presented to the Father through the death and the Resurrection of Christ. Through Christ the Church can offer the sacrifice of praise in thanksgiving for all that God has made good, beautiful, and just in creation and in humanity.

The Eucharist is a sacrifice of thanksgiving to the Father, a blessing by which the Church expresses her gratitude to God for all his benefits, for all that he has accomplished through creation, redemption, and sanctification. Eucharist means first of all “thanksgiving.”

The sacrificial memorial of Christ and of his Body, the Church

The Eucharist is the memorial of Christ’s Passover, the making present and the sacramental offering of his unique sacrifice, in the liturgy of the Church which is his Body. In all the Eucharistic Prayers we find after the words of institution a prayer called the anamnesis or memorial.

In the sense of Sacred Scripture the memorial is not merely the recollection of past events but the  proclamation of the mighty works wrought by God for men (Cf. Ex 13:3). In the liturgical celebration of these events, they become in a certain way present and real. This is how Israel understands its liberation from Egypt: every time Passover is celebrated, the Exodus events are made present to the memory of    believers so that they may conform their lives to them.

In the New Testament, the memorial takes on new meaning. When the Church celebrates the        Eucharist, she commemorates Christ’s Passover, and it is made present the sacrifice Christ offered once for all on the cross remains ever present (Cf. Heb 7:25-27).  “As often as the sacrifice of the Cross by which ‘Christ our Pasch has been sacrificed’ is celebrated on the altar, the work of our redemption is carried out (LG 3; cf. 1 Cor 5:7).”

The sacrificial memorial of Christ and of his Body, the Church

The Eucharist is thus a sacrifice because it re-presents (makes present) the sacrifice of the cross, because it is its memorial and because it applies its fruit:

[Christ], our Lord and God, was once and for all to offer himself to God the Father by his death on the     altar of the cross, to accomplish there an everlasting redemption. But because his priesthood was not to end with his death, at the Last Supper “on the night when he was betrayed,” [he wanted] to leave to his beloved spouse the Church a visible sacrifice (as the nature of man demands) by which the bloody sacrifice which he was to accomplish once for all on the cross would be re-presented, its memory perpetuated until the end of the world, and its salutary power be applied to the forgiveness of the sins we daily commit (Council of Trent (1562): DS 1740; cf. 1 Cor 11:23; Heb 7:24, 27).

The sacrifice of Christ and the sacrifice of the Eucharist are one single sacrifice: “The victim is one and the same: the same now offers through the ministry of priests, who then offered himself on the cross; only the manner of offering is different.” “In this divine sacrifice which is celebrated in the Mass, the same Christ who offered himself once in a bloody manner on the altar of the cross is contained and is offered in an       unbloody manner (Council of Trent (1562): DS 1743; cf. Heb 9:14, 27).”&nbsp
The Eucharist is also the sacrifice of the Church. the Church which is the Body of Christ participates in the offering of her Head. With him, she herself is offered whole and entire. She unites herself to his intercession with the Father for all men. In the Eucharist the sacrifice of Christ becomes also the sacrifice of the members of his Body. the lives of the faithful, their praise, sufferings, prayer, and work, are united with those of Christ and with his total offering, and so acquire a new value. Christ’s sacrifice present on the altar makes it possible for all generations of Christians to be united with his offering.

In the catacombs the Church is often represented as a woman in prayer, arms outstretched in the praying position. Like Christ who stretched out his arms on the cross, through him, with him, and in him, she offers herself and intercedes for all men.

The whole Church is united with the offering and intercession of Christ. Since he has the ministry of Peter in the Church, the Pope is associated with every celebration of the Eucharist, wherein he is named as the sign and servant of the unity of the universal Church. the bishop of the place is always responsible for the Eucharist, even when a priest presides; the bishop’s name is mentioned to signify his presidency over the particular Church, in the midst of his presbyterium and with the assistance of deacons. the community      intercedes also for all ministers who, for it and with it, offer the Eucharistic sacrifice:

Let only that Eucharist be regarded as legitimate, which is celebrated under [the presidency of] the bishop or him to whom he has entrusted it (St. Ignatius of Antioch, Ad Smyrn. 8:1; SCh 10, 138).

Through the ministry of priests the spiritual sacrifice of the faithful is completed in union with the sacrifice of Christ the only Mediator, which in the Eucharist is offered through the priests’ hands in the name of the whole Church in an unbloody and sacramental manner until the Lord himself comes (PO 2 # 4).”